Get Your Season Tickets HERE!

Dive into our 2022-2023 Full-Spectrum Season! We can’t wait for you to embark on this adventure with us. Every title this season features a colorful connection. Scroll down for an overview of all the selections, including content heads-up so you can choose to experience the book (or not!) with confidence. If we missed something, please send us a message and we’ll look into addressing it as soon as we can. The Golden Compass by Philip Pullman

There’s another universe beyond our own! In Philip Pullman’s beloved fantasy novel, twelve-year-old Lyra and her dæmon Pantalaimon must evade the oppressive Magisterium to investigate the “Dust”—a strange substance in the night sky that might reveal a path to parallel worlds.

“…propels readers along with horror and high adventure, a shattering tale that begins with a promise and delivers an entire universe.” —Kirkus (starred review)

Heads up: The Golden Compass’ epic adventure features kids in tough and scary situations, cruel adults, and some grisly moments and deaths. The Picture of Dorian Gray by Oscar Wilde

Not content with a painted portrait, Dorian decides to hold onto his youthful beauty at all costs—even if it means selling his soul. What’s the worst that could happen? Wildly controversial upon publication, The Picture of Dorian Gray is now a revered classic of Gothic literature.

“The saying “be careful what you wish for” has arguably never been more apt in literature than it is in this classic novel.” —The Guardian

Heads up: The Picture of Dorian Gray is out to give you the creeps—be prepared for death, drugs, nasty behavior, and a suicide. City of Orange by David Yoon

Have you ever woken up in a rocky wasteland and wondered where the hell you are? If that feeling was a book, it might be City of Orange, where our hero awakes in a post-apocalyptic landscape with no idea who he is and what happened to the world—or why that crow is talking to him…

“City of Orange belongs in a very narrow category, alongside Emily St. John’s Station Eleven, Richard Matheson’s I Am Legend and Cormac McCarthy’s The Road…David Yoon is willing to ask what ‘the End of the World’ really means — and provide the reader with a thoughtful, heartfelt answer.” —San Francisco Chronicle

Heads up: Despite a healthy dose of humor, City of Orange’s narrator must do what he can to survive, and at least one crow meets a grisly end. Story: Get down with the loudest ink in town! Three local authors—co-curation with Seattle poet Shin Yu Pai—inspire three musicians apiece, a gift of nine new songs in this one-night-only celebration of creativity and collaboration. Red at the Bone by Jacqueline Woodson

As her family gathers to celebrate Melody’s coming-of-age ceremony, even the killer soundtrack (Prince!) can’t stop memories from sneaking in. As they each reflect on the winding paths that brought them here, Red at the Bone moves through time to reveal the fears, hopes, and desires hiding in every heart.

“What we have here is an exquisitely wrought tale of two urban black families…It reads like poetry and drama, a cry from the heart that often cuts close to the bone.” —NPR

Heads up: Red at the Bone is a tender novel that deals with some heavy themes—sexual desire, gentrification, class, parenthood and birth—and touches on cancer and death. The Works of Margaret Wise Brown

Throughout the 1940s, Margaret Wise Brown single-handedly rewrote the book on children’s literature. Groundbreaking works like The Runaway Bunny and Goodnight Moon (which the New York Public Library initially refused to buy) fused poetry and philosophy, captivating generations of readers.

“The first great wonder at the world is big in me. That is why I write.”—Margaret Wise Brown

Heads up: Brown’s writing style has been known to encourage poetic reasoning and independent thought. (In all seriousness: not much to worry about here). Cherished for over a hundred years, Anne of Green Gables follows red-haired Anne Shirley out of the orphanage and through a series of enchanting adventures. Imaginative and passionate, Anne has earned her place as one of the most well-known and adored heroes of twentieth century fiction.

“Anne, the main character, epitomises everything I hope to be: someone who takes joy in the world around her, and, with her fantasies … shares that joy around her.” —The Guardian

Heads up: A classic of young people’s literature, Anne of Green Gables is a gentle story that does include a death. 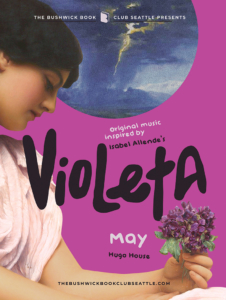 What would it be like to have your life marked by not one but two pandemics? Meet Violeta, born in 1920 near the end of the Spanish flu’s rampage, who will live through the extraordinary march of history leading to the coronavirus pandemic. Told through letters, Violeta is a family epic from a master of the form.

“Violeta is full of life, a great sweeping story like a river in spate.” —The Scotsman

Heads up: Across its 100-year narrative, Violeta covers a lot of ground—large-scale dangers like disease, death, and natural disasters, along with personal perils like sexual assault and bullying. Decades before #vanlife would trend, William Least Heat-Moon responded to upheaval in his life by hitting the road in a 1975 Ford Econoline and chronicling the journey. (“A man who couldn’t make things go right could at least go.”) Without a destination, Least Heat-Moon traveled the country on America’s “blue highways”—rural, two-lane roads so-called because of their color in the road atlas. Part memoir and part travelogue, Blue Highways is an exploration of self and community, an enduring reminder that a country isn’t just a place—it’s people.

“Though the events take place more than 40 years ago, the book reads like a search for what currently ails us, because what ailed us then ails us now.” —New York Times

Heads up: Blue Highways travels deep into many rural parts of America in the politically charged post-Vietnam era of the late-1970s, capturing dialects, attitudes, and customs—warts and all.